This is the second in my series of reviews of new authors I’ve discovered in 2012. David Jackson was highly commended in the CWA Debut Dagger Competition and  subsequently achieved publication through the Macmillan New Writing Scheme. His first book Pariah, has been re-packaged and re-released under the Pan imprint, and I suggest you read it soon because the second book in the series, The Helper, is released on 1st March. 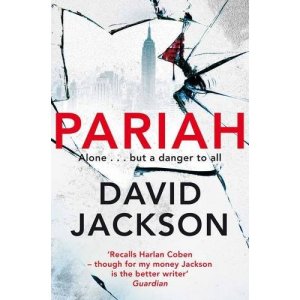 From the back cover: It’s a bad enough day for NYPD detective Callum Doyle when his cop partner is murdered. But when the dead man’s replacement is also brutally killed, suspicion falls on Doyle himself. Then he receives an anonymous message: anyone he gets close to will die – and that includes his own family.

I’d been holding off on reading this until the new paperback edition came out and I was lucky enough to get hold of it early thanks to winning a competition for a signed copy (Thanks Dave!) My only regret is that I didn’t purchase the old edition so I could read it sooner! I love discovering new authors I’ve been hoping to find one with an intriguing main character that would make me want to get to know (both) of them better. I’m pleased to say that Pariah is just what I’ve been waiting for. It centres around Callum Doyle, an Irish New York cop with none of the usual stereotypes except that he likes Bushmills and Guinness, and we can let him off with that.

The story follows his ostracism from the NYPD, and his friends and family, after he seemingly becomes the epicentre of a series of brutal murders. The plot flies, the descriptions make the city jump out at you and the whole cast of characters come alive (except the dead ones, obviously). I loved the tragic Mickey Spinner, and I especially liked the scene in the pub where everyone is trying to ignore Doyle – Paddy the barman’s dialogue was so spot on I could actually hear him speak:

‘Do I pay you to be standing there looking like an idiot when there’re customers to be served? The man has a thirst on him. Give him a drink. And the rest of you: don’t you have better things to do than stand there gawking at the sight of a man ordering a Guinness? Jesus, they must be sad lives you’re living.’

We’re pulled through the story in the present tense, so we get to experience things at the same time as Doyle does and consequently I read this in two sittings because I really couldn’t put it down. I have to admit I was pretty sure I knew whodunnit from quite early on, but that’s because I was brought up with the Taggart school of murder (‘mur-dur’) suspects 😉 This didn’t spoil it for me though as there were quite a few red herrings and ‘what ifs’ to keep the doubt alive!

I love Detective Doyle and I love David Jackson, and thankfully I don’t have to wait too long for the next instalment, because I’ve already placed my Amazon pre-order for The Helper and it will be with me in a couple of weeks – yippee!