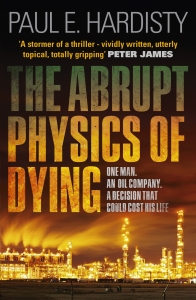 Peter James has described this sparkling debut from Paul E. Hardisty as “A stormer of a thriller – vividly written, utterly topical, totally gripping.” So what’s it about?

Claymore Straker is trying to forget a violent past. Working as an oil company engineer in the wilds of Yemen, he is hijacked at gunpoint by Islamic terrorists. Clay finds himself caught up in a ruthless struggle between opposing armies, controllers of the country’s oil wealth, Yemen’s shadowy secret service, and rival terrorist factions. Accused of a murder he did not commit, put on the CIA’s most-wanted list, Clay must come to terms with his past and confront the powerful forces that want him dead…

And now, as part of the fantastic blog tour arranged by my favourite new publisher, Orenda Books, here is an exclusive post from Paul, talking about life, and writing, and how there is no typical day…

I’ve been writing my whole life. When I was a kid I used to borrow my dad’s typewriter and peg out stories. The Adventures of Paul and Tim was my first story. I think I was five. As a teenager I filled notebooks with adolescent ramblings. There was a point in my early twenties when I realised that I wanted to be a writer. I’d just read A Moveable Feast, and decided that I, too, wanted to take part in the quest for the perfect sentence. Except that I quickly realised that I had nothing to write about. I hadn’t lived. So I decided to get out there and have something to write about.

I started caring about things, and doing things I cared about. I studied, learned about the planet and how it worked. Built a career that would take me outside, to faraway places, helping people. And as I went, I wrote. The stacks of notebooks grew, page ends curing in the sun. Much of that space was filled with exhortations to myself never to let go of the dream. I met the woman I eventually realised was created, somehow – cosmic mystery – for me (whether I have come even close to fulfilling that same function for her, I continue to wonder). We travelled the world together as I built a business, had two sons together. I read. And read. I had to write for my work, too: reports, proposals, conference papers, eventually peer-reviewed journal papers, and then, years later, my first technical book. It was arcane, and highly specialised, but it was a book, with my name on the front and a cover and everything. I was getting there, the long way.

For me, there has never been a typical day. I’ve learned to write just about anywhere, on anything. Much of the foundation work I do is longhand, usually outside somewhere, on the side of a mountain path, sheltering under a tree as a squall comes through, scattered drops dappling the page of my notebook, on a train platform somewhere cold. I always keep a notebook and a pencil next to where I dream (I don’t so much sleep as dream). There is one sequence in The Abrupt Physics of Dying – just published by Orenda Books – that came almost straight and entire from a scrawled download of a dream in my tent down in Margaret River one night. Jolted from one reality to another by a roo thudding along in the bush close by. I flipped on my head torch and scribbled it down as fast as I could.   These things are like liquid, pouring between your fingers, hard to hold.

Through the years I have learned that my most creative and productive writing time is morning. I still work full-time, at a job I think is important for the world (environmental research). So whenever I can, I sequester a morning (eight ‘till noon), get up fresh from dreaming and go and sit outside somewhere (our back yard in Perth), put on my headphones, crank up the music, and write. These days, that’s one maybe two days a week. Not nearly enough. Writing hurts. But it hurts most when you can’t do it.