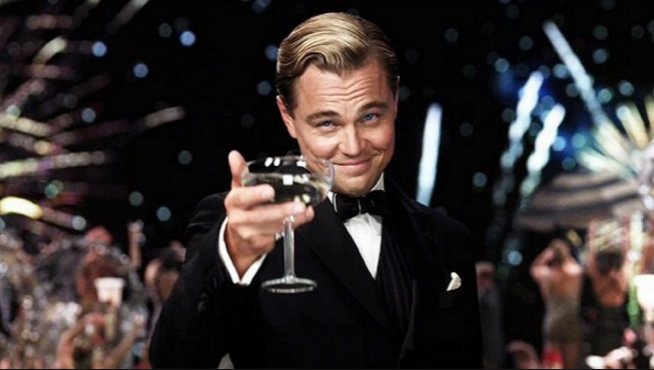 Happy eBook release day to me! Willow Walk is out NOW (this is both very exciting and very terrifying!) To celebrate release day, I am doing a Q&A on twitter with another four BritCrime authors who have books out today: Mark Billingham, Cal Moriarty, Steven Dunne and Chris Ewan. You can tweet us your Qs using the hashtag #CrimeFive and we will answer them from 5pm. You can also find me over at Jane Isaac’s blog today, Rebecca Bradley’s tomorrow and Anne Cater’s on Saturday.

One of the biggest things I learned from the release of Black Wood is just how important reviews are. Reviews help get a book noticed, and I read somewhere recently that 50 reviews on Amazon really helps get the book into their algorithms, so it is shared more. Obviously I want everyone to find my book – so if you read it, please review on Amazon, Goodreads and any other places that do reviews – they really help! One of my fab blogger friends, Vicki, has been campaigning on twitter recently, encouraging people to write reviews and to cherish books – both sentiments I agree with entirety – you can read about it HERE

Anyway, enough about the book – it’s out there now… and I am dying to know what you all think of it! FYI – Black Wood reached #14 in the overall kindle chart, and #1 in psychological, Scottish and several other categories. I wonder how Willow Walk will do?!

P.S. I had a fantastic time at Newcastle Noir last weekend – there are a few photos HERE

The countdown has begun!!

The eBook of WILLOW WALK comes out on 5th May, for a crazy introductory price of 98p.

That’s less than seven weeks away… SEVEN WEEKS! (But you’ll have to wait until 10th June for the paperback. Sorry!)

I can’t wait for you all to read it – and if you can’t wait, you can click HERE to get an exclusive preview of the first ten pages.

You’ll get a free short story too – it’s called Wrack Line, and it takes place between Black Wood and Willow Walk. My favourite crime blogger, Crimethrillergirl, said it had a nice twist (and she knows what she’s talking about…) so why don’t you put the kettle on, make yourself a drink and give it a read?

WILLOW WALK can be pre-ordered from all good bookshops (links below):

One of the most exciting things about being an author is getting that email from the publisher with the subject line ‘COVER!’

Luckily, my publisher allows me some input into how I imagine it might look. Then the design team works with sales and marketing to come up with something that fits the theme, as well as being aligned with designs that are currently popular in the market. The other consideration, of course, was to make sure it complemented Black Wood.

I always imagined a fairground scene on the cover, as this is one of the key settings in the book – but other than that, I was happy to wait and see what appeared – and I wasn’t disappointed! When I got the email back in early December last year (which seems like forever ago!) I had no real idea what to expect – and when I opened the file, it was the font colour that was the biggest shock of all – in a GOOD way!

In fact, I’m already thinking about how to coordinate my outfit for the launch nights…

I love it and can’t wait to see it on the shelves – what do you think?

Willow Walk will be out in May (eBook) / June (paperback) – pre-order information will be available soon – in the meantime, you can have a peek at what some of the early readers have said about it HERE

If you can’t wait that long, there will be a free Davie Gray short story only for subscribers delivered to your inbox on 18th March which will include an exclusive preview of Willow Walk… so if you haven’t signed up already, you can do it HERE – what are you waiting for? 🙂 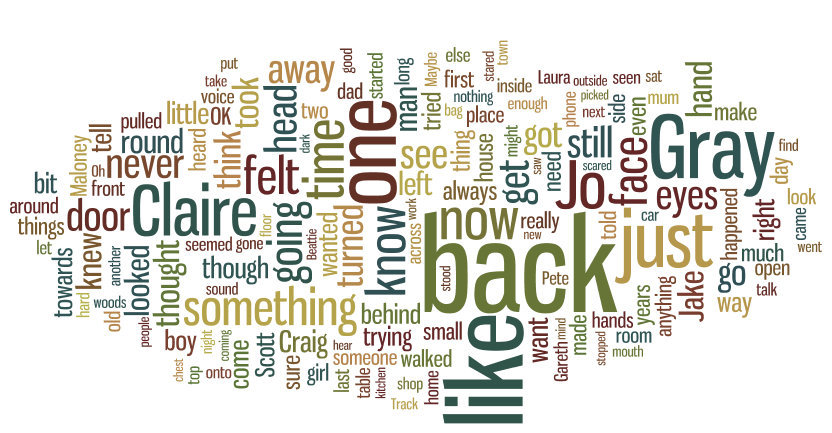 It’s always nice to find a new tool to play with when the procrastination monkeys start swinging from the rafters. Not that I’ve been idle – I finished the first draft of book two recently (more about that soon!), so I’ve been taking some time out to read and to plot a short story, as well as some early planning for book three.

Anyway, I found this thing called Wordle. It creates word clouds that you can customise in all sorts of ways. Just paste in your text, and play away…

This is one I created for Black Wood (which, by the way, audio fans – is now available on audible, and I LOVE the narration!) 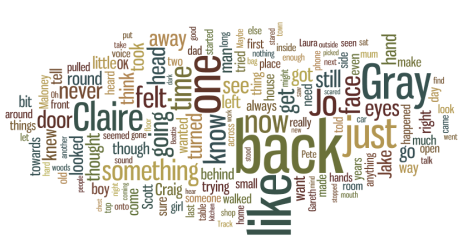 …and this is one for my second book. Comparing the two, the word ‘back’ seems quite important – which makes sense I think, as both novels deal with secrets and have characters who don’t want to look back – but unfortunately, they can’t avoid it. Also the words ‘one’ and ‘like’ feature heavily. I’ve no insights on that. However, I will have some news about book two soon, so stay tuned, Davie Gray fans!

P.S. I recently shared my five favourite fictional murder weapons for BritCrime – you can read it HERE

P.P.S. I also featured on Anne Cater’s blog as part of the Book Connectors/Trip Fiction ‘Around The World’ Blog Tour – you can read it HERE

P.P.P.S I have been recommending a book to everyone called Take Off Your Pants! by Libbie Hawker – I will be blogging about it in detail soon, but if you are struggling with the mid-draft slump, or thinking about #NaNoWriMo, you might want to take a look 🙂

P.P.P.P.S You can sign up for my newsletter HERE (you won’t get anything for a while as I am still setting it up, and you can unsubscribe any time – updates will be infrequent, but will include exclusive news and giveaways)

While I’ve been busy working on my edits from my lovely editor, Karyn at Black and White Publishing (who misses NOTHING, by the way – but that’s another story…) the designers have been working their magic on my cover… I can’t even express how much I love this cover! The woods… the yellow… the font… the creepy little girls…

I’ve had some fantastic review quotes already, and I am so happy with the one that’s been used on the front – it fits the book perfectly! Thank you Fergus and thank you to everyone who’s read an early copy and told me how much they enjoyed it. It’s a scary thing, letting people read your first novel, but I suppose I better get used to it 🙂

Big thanks to my writing friend and FlashFlood editing buddy, Shirley Golden, for inviting me to join this blog tour. It made me think a lot about my writing habits! So if you’re interested in what I’m up to and how I do what I do, here are my responses to the questions… 🙂

You can read Shirley’s responses from last week HERE.

What am I working on?

I am working on my debut – a psychological suspense novel called BLACK WOOD. I recently received comments (all good – whew!) from my agent after a bit of a rewrite and we are now brainstorming the final part of the puzzle before it gets submitted to publishers (again). Fingers crossed!

I have plans for another two books set in the same town – not quite a series, but sharing a setting and with some overlapping characters – a bit like Belinda Bauer‘s Shipcott novels (Blacklands, Dark Side and Finders Keepers), which are not really a series as such, but all set in the same place.

How does my work differ from others of its genre?

This is an interesting question, as I have recently been trying to formulate a short pitch for my novel that describes it in one sentence. After some discussion on facebook and twitter, it currently reads like this:

“Amidst the claustrophobia of a small Scottish town, Black Wood spins a tale of dark secrets and fractured friendships, where past meets present with devastating consequences…”

How does this differ from other novels in my genre? Well, I’m not really sure… the book focuses on the lives of the characters and how they interconnect in a place where gossip is rife, everyone knows your business, and secrets never remain buried forever. The ‘crime’ element is almost secondary to the main thread of the story. Black Wood does contain various elements that could place it in different genres according to taste…

Also, as I have written outlines for several standalones, which are all completely different and possibly more in the realm of horror/weird fiction – think: ‘Tales of the Unexpected’ – I don’t think I’m in danger of being labelled predictable 😉

Why do I write what I do?

I’ve always read a lot of crime and horror fiction, and am particularly interested in the psychological aspects of bad things happening to ordinary people and how they react. I particularly like dark secrets and the exploration of relationships – the idea that people are rarely what they seem. I’m writing the kind of things that I like to read. I think I would struggle to write for any other reason. Like many writers, I am fascinated by the concept of ‘what if..?’ and this is a scenario that seems to work well in most good genre fiction.

How does my writing process work?

I don’t believe in a strict set of rules for writing. Everyone is different and works in different ways. I’ve bought loads of books on the craft of writing, and most have a few good tips and tricks, but the only way I can see it working is to find your own way. Anyone who tells you it’s easy is lying. Writing is hard work, but the feeling you get when someone tells you they’ve enjoyed something you’ve written makes it all worthwhile.

Jane Isaac‘s first novel, An Unfamiliar Murder, was nominated as best mystery in the ‘eFestival of Words Best of the Independent eBook awards 2013.’ The sequel, The Truth Will Out will be released on 1st April 2014. Jane lives with her husband, daughter and dog, Bollo, in rural Northamptonshire.

Miranda Kate is a British expat living in Holland, who by day is a freelance editor, and by night a writer of dark, disturbing ‘real-life’ fiction. Primarily a novel writer, Miranda enjoys exploring her writing through flash fiction, finding a certain satisfaction in the end result.

Laura Jamez, a mother of two from Dunfermline, has been obsessed with horror stories from a very young age. She is currently working on a new collection exploring the worlds of a Vampires and Werewolves, due for release late Spring 2014.