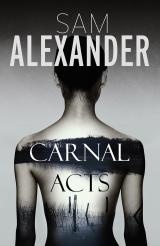 You might have heard about the debut novel by new kid on the block, Sam Alexander. It’s called Carnal Acts, and it is currently the subject of a fantastic marketing/publicity campaign by the publisher, Arcadia Books, using the twitter hashtag #WhoIsSamAlexander. Why the excitement? Because ‘Sam’ is not really a debut… Sam Alexander is a pseudonym for an acclaimed British crime writer, whose identity will be unveiled if and when the time is right…

I am VERY excited to share this post with you (it has also been posted at Shots Magazine)… Read on for an exclusive Q&A with the author. Will the clues help you work out who it is???

SJIH: Hi Sam, welcome to my blog! Your ‘debut’ novel, Carnal Acts is out now, amidst a storm of promo and the #WhoIsSamAlexander campaign… how do you feel?

SA: Thanks! Nice to be back, in disguise… To tell you the truth – something that I will of course be doing all through this piece – I’m amazed. Arcadia’s campaign has exceeded all my expectations and the book seems to have struck a bell with many bloggers and early readers. All of which is enormously gratifying – well done, Arcadia! And it’s been an honour to be seen, even in an imaginary world – as Val McDermid, Ian Rankin, JK Rowling (my kids LOVED that – oh, it’s an author who has kids – hope that helps…), Kate Atkinson and so on. Less so Jeffrey Archer, tho I presume that was tongue inserted deeply into cheek.

SJIH: Ha! So, for anyone who’s been living under a rock… what’s it about?

SA: Carnal Acts is a police procedural, a sub-genre I haven’t attempted before (CLUE!). The lead cops are mixed race DI Joni Pax and her DCI, Heck Rutherford. They’re both damaged, as convention requires, but not in the standard crap marriage/ alcohol-reliant/ dodgy taste in music ways. Joni was badly wounded in a Met operation that went wrong, while Heck has only recently returned to work after cancer surgery. Joni is different from everyone else in the force and locale – not just because of her colour and capital-city experience, but because she’s an Oxford graduate and a thinker. On the other hand, she seems to have inherited some of her mother’s feyness. Heck’s a former rugby player, much more down to earth, with an idyllic family life. (Are you watching, John Rebus?) The novel’s about slavery – modern people-trafficking, specifically of young Eastern European women to brothels, but also the original slave trade on which so much of Britain’s historical wealth was based. Joni becomes troubled by her ignorance about her own heritage as the case goes on. She also develops an empathetic bond with Suzana, a brothel-worker who escapes her captors, killing one and injuring others. The Albanian mob are after Suzana and they have friends in many unlikely places…

SJIH: Intriguing! The North East England setting – the fictional town of Corham –has got everyone talking. Are you from there? What made you choose it as a setting? You do know it means that everyone thinks you’re Mari Hannah?

SA: First, the Mari Hannah thing. I don’t get it. She’s already writing a successful north-eastern series. Why would she do another under a synonym? Corham was important as a backdrop. I know Corbridge and Hexham pretty well, but neither of them is big enough to be the base of a large police force. So I added elements of the former steel town Consett, too, something that people don’t seem to have picked up. That made a place big enough to accommodate the newly formed (invented by moi) Police Force of North East England. I like inventing stuff. In this case, that’s given my friends in the area a lot to laugh about – several of their crazy exploits are in the book. Apart from the fact that I know it, I chose the area because it’s a borderland, not just with Scotland but with other parts of England – Cumbria, Yorkshire. Borderlands, the interstices between places, are fertile areas for writers. People and their relationships are more complex. Also, I love the countryside I describe in the book. The more deserted parts of the Roman wall are extremely sublime and inspiring.

SJIH: I particularly like that you invented a new Police Force! Back to story then – it centres around Albanian gangs and human trafficking – what made you want to write about this?

SA: Yes, gangs and trafficking. I couldn’t really avoid the subject, although many other writers have. If you drive around the country – not just the North East – you see people labouring in the fields. If you stop and listen, you realise they’re often speaking a different language. That makes you think about what their lives must be like. Do they miss home? How did they end up in a freezing field in, say, Northumberland? Do they have kids? Have they left them behind? Then you think about the young women who are forced to work on their backs. If you’re a crime writer, that’s plenty to get you going – exploitation, physical suffering, in effect slavery. In modern, go-ahead, Cameronian Britain. In a novelistic way, I decided I wasn’t going to take it any more. Not least because the exploiters aren’t just the Albanian gangs – they’re the locals who pay for sex, who pay field workers below the minimum wage and so on. This is becoming a bit of a sermon. There’s a pacy plot, interesting characters and plenty of black humour too, honest…

SJIH: I agree! It’s a good ‘un! So, Pax and Rutherford… tells us about them… Which one are you most like?

SA: Obviously I’m most like Pax. No, Rutherford. Good try… Actually, there are elements of me in both, as is always the case with fictional characters and their creators. I would love to be a strong woman like Joni. I would also love to have a husband like Heck. Wish fulfilment is one of the good parts of writing fiction. Then again, Heck got cut open by a surgeon. I wouldn’t fancy that at all; let alone Joni’s stabbing by a vicious criminal. As for what happens to poor Suzana – I can’t imagine what it must be like to be forced to have sex with strangers numerous times a day. Well, I gave it a try. But I’m outraged that it happens.

SJIH: You’re not giving away many clues, are you?! Anyway, to the big question… Although this is ‘Sam’s’ debut, it’s not a secret that you’ve written successfully under another name. What is it? (Kidding! I am saving that question for later…) How did writing Carnal Acts differ to your previous book(s)?

SA: I’m in danger of letting the lion cub out of the sack here. Let’s just say that more people were involved in the writing process than normal. In the past it’s been my excellent agent and me – s/he reads my weekly production and presses the panic button if anything goes off at a tangent. S/he was involved this time too, but there was input from others, including the hyper-wonderful folks at Arcadia. Still, writing Carnal Acts was the marathon that every novel is. You do your daily word count, you juggle as many balls as you can (and in this case, there were a lot of subplots and the like), you try to turn off your brain at weekends. Unsuccessfully, of course. It’s a hard life, but nothing like as bad as Suzana’s.

SJIH: True. Do you think there are similarities between your writing in this book and your others? Have you left a trail of clues as to your identity?

SA: Dunno. I suppose there are bound to be similarities – I didn’t deliberately try to create a new style. On the other hand, I’d decided from the outset that I was going to use a pseudonym so that, plus the setting and characters led to a new start, if you like. I certainly didn’t plant clues, at least not wittingly. No doubt a follower of Freud or other schools of psychoanalysis would be able to go to town (Corham) on my sexual hang-ups, sadistic tendencies and so on. ‘Me, I’m just a lawnmower, you can tell me by the way I walk…’ (Pat on the back for anyone who spots that reference.)

SJIH: Far too obscure for me, I’m afraid… Ok, so what’s next for Sam Alexander? Can we expect more of Pax and Rutherford?

SA: I’m currently thinking about a sequel. I’m sure Joni and Heck have the legs for a series, but I don’t want to send them off in a wrong direction in that difficult second novel. But they’ll be back…

SJIH: Fantastic! And finally (I ask everyone this…) what question does no one ever ask you that you would really like to be asked? (and what’s the answer?!)

SA: Q – ‘Do you think crime fiction handles issues of power and the abuse of power adequately?’ A – ‘No, I don’t. Given that crime is often about the strong (even an old lady poisoner in a Christie novel) exercising power over the weak (the unsuspecting, the clueless, the supposedly anti-social), I find it amazing that the wider implications of the exercise of power throughout society aren’t examined more by crime novelists in England. Perhaps that’s why the Scandinavian crime wave has been so successful – because it goes places that the home-grown crime novel (with honourable exceptions) doesn’t. Having said that, I still find Swedish meatballs less than palatable.’

SJIH: Oh you disappoint me. They are my favourite of all the meatballs… Thanks so much for talking to me, Sam. Just one final question… are you going to tell us who you are?

CARNAL ACTS is out now, and it’s a cracker of a book (review to follow soon, but for now – here’s the blurb…)

The northern English borderlands play host to crime noir at its darkest and most terrifying.

DI Joni Pax, a London homicide detective, wounded in a disastrous raid, has been transferred to the newly formed Police Force of North East England. Her boss, DCI Hector ‘Heck’ Rutherford, is recently back at work after cancer treatment. Between them they are responsible for major crime in rural Northumberland and County Durham. Joni, the daughter of a black American and a white hippy, is a loner struggling to regain her self-confidence. Heck is happily married, but illness has left him fearful.

Based in Corham, a town with Roman, medieval and industrial heritage, Pax and Rutherford investigate a murder at a brothel run by the Albanian mafia. In a series of breathtaking plot twists, we are drawn into the corruption that underpins the beautiful northern English countryside – as well as hinting at a mysterious world beyond the horizon. Carnal Acts explores abuse of many kinds – sexual, psychological and economic – taking the police procedural to places it has never been before.

Dark, unremitting and terrifyingly relevant, Carnal Acts is a book you may hesitate to pick up and put down.

5 thoughts on “#WhoIsSamAlexander – Exclusive Interview with the Illusive Author”